My life is really good. I have found that the more joy I experience, the harder Satan fights. He is louder than usual this week. He’s relentless. While God has done so much transformation in my heart in the last couple years, there’s still so much left to do. The shame runs deep.

Most of my shame is private. I went to college to learn public relations, meaning I know how to make anything sound good. But the truth is – under all the Christianese and positive perspective, there’s actually a lot of shame. Shame isolates. Shame lies. Shame demeans. Shame condemns. Shame taunts. Shame keeps me awake at night.

I know the truth. I know that I’m a child of God. But shame creeps in and tells me often that I’m a mistake. That I’m not enough. That I am a defect.

And if you’re honest, shame probably creeps in and tells you those same things sometimes. You’re not pretty enough. Not smart enough. Not strong enough. Not good enough. Unlovable. Unworthy. Unsuitable. Lesser than.

It all started somewhere. For me, it started the day I learned I wasn’t like the other kids. I learned that endless surgeries and glasses and hearing aides and not being able to play like the other kids was weird when I was about 4 years old. I was in preschool and my hearing aide started squealing in my ear because I had turned it too loud. High pitch noises hurt my ears. I remember the moment of self-awareness. I was sitting on a beanbag in the “reading corner” holding my ears and everyone else was eating their snack and playing. I looked around and realized nobody else had hearing aides and nobody else was holding their ears.

And then there’s the day I learned my hand-eye coordination is not just bad, it’s REALLY bad. It’s awful. I wasn’t usually the last picked for recess ball games but I was one of the last.

And there’s the first day of second grade. The day my teacher asked us to draw a picture of our family. “Draw a picture of your mom, your dad, your brothers and sisters, your pets.” My adoptive father had just left and divorced my mom that summer. I had already been abandoned by two men. I raised my hand and very innocently asked, “what if you don’t have a dad?” Another well-meaning girl near me said, “everyone has a dad.” But I didn’t.

And there’s the day I was in the eighth grade and my stepdad told me I would never amount to anything and that I was a waste of space. That I could pack my sh*t and go somewhere else. That I wasn’t worth anything.

And as I grew up, I covered up my shame. I avoided it. I smothered it. I ignored it. I pushed through it. I dressed it up and made it fuel for my “overcoming obstacles” storyline. I lived in the dark. I hoped people wouldn’t notice my flaws. All the ways I was too messed up. Too far gone. Too wrecked. My life became one long string of lies. Complex webs of lies, deception, manipulation. Mistruths. Untruths. Exaggerations. It was the only way to avoid my truth – that I was a colossal mistake.

Have you ever tried to put a Lego kit together? When I was “Miss Felicia” in a former life, I found myself sitting at the kitchen table with a Lego kit
sprawled out in front of me multiple times. There’s 10,000 pieces. Half of them are the size of an ant or smaller. The instruction booklets might as well be textbooks and I would have little eyes staring at me, “Miss Felicia, can you do it?” Confession: More often than not, I would distract the kids long enough to stash the Legos in the attic or basement and offer them a trip to the trampoline park or the playground or anywhere but the kitchen table with Legos.

Have you ever felt like your life is a Lego kit? Like there’s all these pieces and this really difficult instruction manual and all eyes are on you? I know I have. When I decide it’s too hard and I can’t do it is when I stuff the tiny blocks from Hell (am I right?) and distract myself with something easier. And when I do that, shame wins. On the outside, I look like I’m having a blast. I’m jumping around on trampolines and eating ice cream, but on the inside, I know I gave up on the hard stuff. I know I don’t think I’m worth putting the time and effort in to put the whole thing together. I know I quit.

And what about the times I did sit and pretend to work on the kit? I would just stick some stuff together and try to make something on my own. Because when you’re dishonest about your mess, you don’t get to have others help you. You get to sit there and make pieces that don’t go together fit. And in the end, you don’t have a finished masterpiece. You have a mess. You have something that might be “good enough” for a minute or two, but eventually, you will look at it and realize you messed it all up.

A couple years ago, a mentor dug out my Lego kit and confronted me with it. All the hard stuff I had been hiding in the attic of my life was all out on the table again. And this time, I didn’t have much of a choice. I had to sit down and read the manual and keep working to put the kit together. It meant consequences. It meant three days in a mental health facility. It meant professional counseling, and a lot of it. It meant more accountability and boundaries. It meant starting all over in almost every aspect of life.

I’m here today to tell you I made a lot of progress on my Lego kit. I still have some work to do though. I missed a few pieces along the way. I still struggle with shame. I might struggle with it until the day I die. But I know that being honest about my shame has to be part of the process. The other thing I know is replacing the lies I believe about myself with truths is another part of the process.

God talks a lot about who we are in His Word. He calls us His children. He calls us coheirs with Christ. He says He fearfully and wonderfully made us. He says He sent His Son to die on a cross to wear our sins and bear our shame. He says we are chosen and forgiven.

I told you Satan has been relentless this week. Yesterday morning, my inbox told me I wasn’t enough in an email informing me I was cut from my team at work. Shame tells me I am not allowed to have fear and because I do, I need to hide.

I choose to spend time with my Father instead. Because I am called into community with Him and that is only possible when I walk out of the familiar darkness of shame into the unknown light of vulnerability. He reminded me that my inbox is right. I am not enough, but He is.

Fear has no choice but to bow.

Chains have no choice but to break.

Shame has no choice but to leave in Your presence.

Here’s my takeaways for you today. Give fear no choice but to bow, chains no 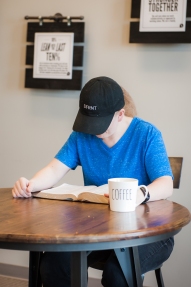 choice but to break and shame no reason but to leave by spending time with the Father. Turn on some worship music. Open up your Bible. Bow your head in prayer. You don’t even have to say anything. Just sit and let your Father in Heaven love on you.

But no matter what, don’t shove the Lego kit in the attic or under the bed. Dig in and do the work. I promise you it will be worth it. You are not enough, but Jesus is. Even when you need help, don’t let pride tell you that you either have to do it alone or not do it at all.